• Diabetes Mellitus affects the pancreas which is responsible for the production of enzymes necessary to digest foods. Recent research continues to confirm that as many as 74% of Diabetic patients have a compromised ability to digest and absorb fat.
• One of the highest concentration of Omega-3s found in the body; specifically DHA, is in the retina. Peer- reviewed data is plentiful to support the nutritional need for Omega-3s EPA/DHA as a medical food to protect against the development and arrest progression of DR in the already Omega-3 fatty acids deficient diabetic patient.15i
• Individuals with type II Diabetes Mellitus without Diabetic Retinopathy should be encouraged to have an annual dilated eye examination to detect the onset of Diabetic Retinopathy.

Diabetic Retinopathy is a complication of diabetes (both type I and type II). It’s caused by damage to the blood vessels of the light-sensitive tissue in the retina when high blood sugar levels are not managed.1
The market opportunity for nutritional intervention for the Diabetic population as it pertains to Diabetic Retinopathy continues to expand as the prevalence of type II Diabetes continues to rise.

Type I and Type II Diabetes

Understanding a Nutritional Imbalance of Omegas

Research has confirmed that recent dietary habits have shown a large departure from how the body is “programmed” to receive optimal nutrition by a consistent diet that provides very close to equal amounts of omega-3s and omega-6s polyunsaturated fatty acids (PUFAs).7i In the last 150 years, there has been an enormous increase in the consumption of Omega-6 fatty acids due to the increased intake of vegetable oils (corn, sunflower, safflower and soybean oils) from processed food sources.

This research also indicates that the standard Western Diet currently has a ratio of 20-30:1 Omega-6: Omega-3 instead of a more balanced ratio of 2-1:1.7ii Maintaining this balance of PUFAs is considered to be a necessary nutritional component for our general health and to maintain homeostasis within the cell membrane to turn on or off the inflammatory cascade as physiologically necessary.8 Omega-3s and Omega-6s compete for absorption; thus supplementation with specific essential fatty acids (EFAs) is necessary for individuals nutritionally compromised in addition to individuals with disease states that further compromise the body’s ability to digest and absorb fat.9

The most common Omega-3s are Alpha Linolenic Acid (ALA), Eicosapentaenoic Acid (EPA) and Docosahexaenoic Acid (DHA). ALA is the plant source Omega-3 found in green leafy vegetables and seeds like flax. ALA is the most abundant Omega-3 in nature. Unfortunately, ALA is not a preformed omega-3 fatty acid and must be biochemically converted in the body to EPA and DHA for the nutrients to be useful to offset the nutritional imbalance of Omega-3s.10

Furthermore, while ALA is used by the body as a source of energy, partly as a precursor of metabolites, the degree of conversion to beneficial Omega-3s EPA and DHA appears to be unreliable and restricted.11 EPA and DHA are known as “preformed” Omega-3s, which means that no biochemical enzymatic processes are needed for the nutrients to be immediately beneficial when consumed.12
Diabetes Mellitus affects the pancreas which is responsible for the production of enzymes necessary to digest foods. Nutritional data identifies a decrease in pancreatic function in patients with diabetes as early as 1943.13i When the role of insulin was established in the early 20th century, physicians were aware that patients with diabetes also suffered from malnutrition.13ii
The suspicion that the digestive function of the pancreas might be reduced in patients with Diabetes Mellitus prompted investigation of exocrine pancreatic function once tests became available.13iii Recent research confirms that as many as 74% of Diabetic patients have a compromised ability to digest and absorb fat further adding to the nutritional implications of an imbalance or deficiency of PUFAs.13iv Providing the most bioavailable form of EPA and DHA essential fatty acids is necessary to address this deficiency.

Diabetes Mellitus affects the pancreas which is responsible for the production of enzymes necessary to digest foods. Recent research continues to confirm that as many as 74% of Diabetic patients have a compromised ability to digest and absorb fat.

When high blood sugar levels are not managed; damage to the blood vessels of the light sensitive tissue in the retina lead to Diabetic Retinopathy. This diabetes induced injury of the retinal micro-vessels leads to the vascular pathology of Diabetic Retinopathy and ultimately vision loss.14 There are several stages of retinal vascular degeneration all of which have been shown to benefit with the introduction of Omega-3s EPA/DHA into a treatment protocol.

One of highest concentrations of Omega-3s found in the body; specifically DHA, is in the retina. Peer-reviewed data supports the nutritional need for Omega-3s EPA/DHA to protect against the development and arrest progression of Diabetic Retinopathy in the already Omega-3 fatty acids deficient diabetic patient.15i A study conducted by the National Institutes of Health (NIH) supports nutritional intervention as treatment. The researchers found that increasing Omega-3s and decreasing Omega-6 fatty acids in the diet of mice reduced the area of vessel loss that ultimately causes the growth of the abnormal vessels which may lead to blindness. Omega-6 fatty acids further contribute to the growth of abnormal blood vessels in the retina. The study showed that the mice with higher amounts of Omega-3s had a nearly 50 percent decrease in all phases of retinopathy.15ii

Further data taken from a sub-study of the PREDIMED randomized clinical trial analyzed as an observational longitudinal cohort, considering only participants with type 2 diabetes at baseline, showed after a median follow-up of 6 years that those reporting intake of at least 500/mg daily intake of long-chain Omega-3s (EPA/DHA) at baseline had a 46% decreased risk of sight- threatening Diabetic Retinopathy compared to those not meeting the Omega-3s target intake. In addition, higher risk reductions were observed in participants with hypertension, those with diabetes of greater than 5 years duration, and those treated with insulin at baseline.17

One of the highest concentrations of Omega-3s found in the body; specifically DHA, is in the retina. Peer- reviewed data is plentiful to support the nutritional need for Omega-3s EPA/DHA as a medical food to protect against the development and arrest progression of DR in the already Omega-3 fatty acids deficient diabetic patient.15i 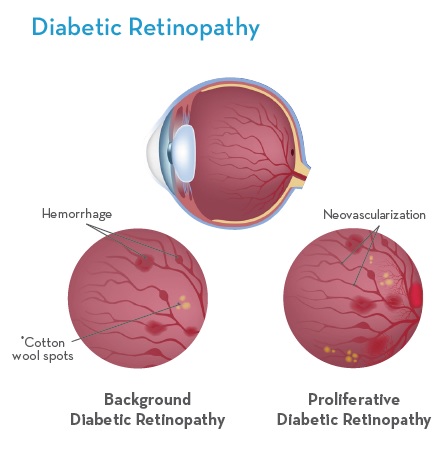 Ranibizumab plus supplementation reduced central subfield macular thickness compared with the injections alone.18ii In addition, the supplementation group also had a significant reduction in Omega-6 arachidonic acid levels at 12 months and a significant decrease at 24 months compared with baseline.18iii Concomitantly, a similar pattern in the reduction of Omega-6 to Omega-3 ratio was observed.18iv The authors state, “the use of intravitreal ranibizumab along with DHA supplementation in patients with DME is extensively applicable to daily clinical practice”.18v

Risk Factors for Progression Once retinopathy is present, duration of diabetes appears to be a less important factor than glycemic control in forecasting progression from earlier to later stages of retinopathy.19 Intensive management of hypertension may slow retinopathy progression, yet the data remain inconclusive. Large studies have suggested that management of serum lipids may reduce retinopathy progression and the need for treatment.20 Thus, ophthalmologists should encourage patients with diabetes to be as compliant as possible with therapy of all medical and nutritional aspects of their disease. 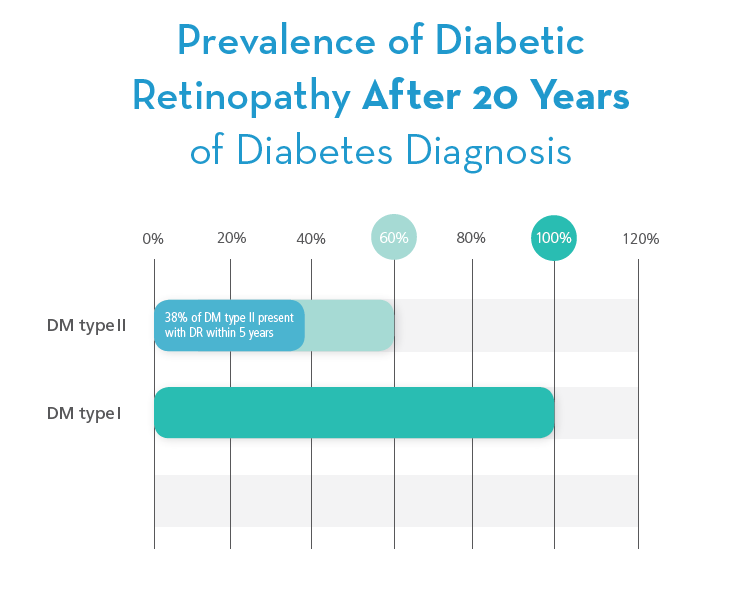 Optometrists and Ophthalmologists both receive Diabetic referrals from Primary Care Physicians as well as Optometrists that only perform refraction; however, referral to an ophthalmologist is required when there is advanced non-proliferative Diabetic Retinopathy (NPDR), proliferative retinopathy (PDR), or macular edema (ME). Referral to a retinal specialist varies among the disease management in the NPDR but generally is referred before development of PDR.


Patient Outcome Criteria:
• Improvement or stabilization of visual function
• Improvement or stabilization of vision-related quality of life
• Optimal control of glucose, blood pressure, and other risk factors through close communication with the patient’s primary care physician regarding the status of the Diabetic Retinopathy and the need for optimal metabolic control